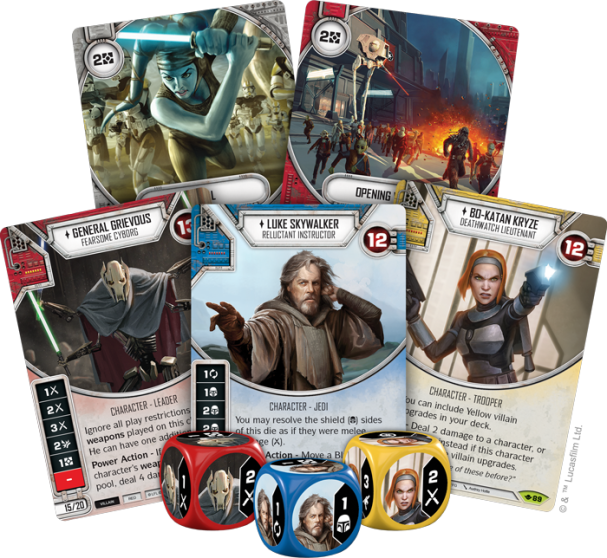 “I am your density.” -George McFly

Summer 1987: Most of my paper route earnings disappeared 33 cents at a time for packs of Topps baseball cards, which was my entry into the dopamine hit of card packs. Would I score a Mark McGwire? Bo Jackson?

Or another Pat Tabler.

Winter 2001: Now all grown up, most of my engineering earnings disappeared 3 dollars at a time for Decipher’s Lord of the Rings Trading Card Game. I revisited the joy of childhood, this time hoping for Aragorn’s Bow or The Witch King.  Nearly 20 years later we’re still building Hobbit Healers and Moria Swarms at our house.

Spring 2020: Nearly two decades after LOTR, I bought a few deeply-discounted booster boxes to put together a casual play Star Wars: Destiny decks. Instead of crunchy chewing gum, each pack of Destiny includes a chunky die!

The primary colors in Star Wars: Destiny are literally the primary colors – red, blue, and yellow (with grey thrown in). This eases the burden for most colorblind players. I found the cards and dice colors easy to distinguish from one another. In addition, each is also double-coded with the color name typed at the bottom. The dice are not double-coded, but their image matches all or part of the card’s image.

Note for low-vision gamers: Along with my color vision deficiency, I’m also experiencing something doctors call “getting old,” which has reduced my ability to read very small text. Most text and icons in this game are fantastic – font size is fine, contrast is good, and the iconography is top notch. But the bottom-level text, including the double-coded color information, is in tiny uppercase font – I find it barely readable.

To build a Star Wars: Destiny deck, players first choose heroes (typically 2 or 3), and then only use cards that match one of those heroes’ colors. So someone with a severe color vision deficiency may need help, but again, the color is typed at the bottom of each card.

Identifying colors is not as vital during gameplay, though some require spotting a color or card/hero/die or acting on a single color of dice or other cards in play.

The only real color problem I encountered, which hasn’t caused any issues during normal play, is that collector-level colors are more subtle, as illustrated and described here: 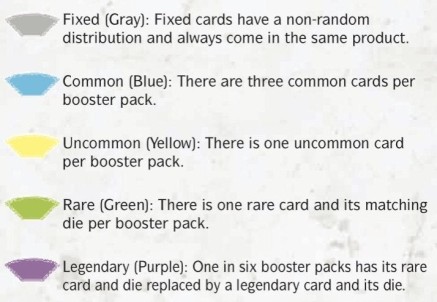 The gray, blue, and purple can be easily mixed up by those with color vision deficiency, especially given their small size in the bottom corner of each card. However, Legendary (Purple) cards always come with a die and Common (Blue) cards never do, so once I learned more about the distribution of card rarity I found this easy to work around.

At the end of the day, Star Wars: Destiny is quite playable for colorblind gamers. Its bright palette of red, blue, and yellow make cards easy to distinguish, and double-coding can help those who continue to have issues. I experienced some challenge during booster pack opening, due to the colors used for rarity and the very small font and icons denoting each card’s number and set.

If you’re interested at all, I’ve found this to be a great time to jump into Star Wars: Destiny, if only to relive the joy of opening boosters!

View all posts by Brian Chandler