As I walked from Fantasyland toward Star Wars: Galaxy’s Edge, Disney set the stage, subtly changing the sights and sounds of my environment, taking me far, far away from Snow White and Peter Pan. It was a truly immersive experience.

Millennium Falcon: Smugglers Run is the centerpiece of this new land and a fantastic theme park ride. One part Star Tours, one part role-playing game, it’s a must-see the next time you visit Disneyland Park or Walt Disney World.

I had two minor nitpicks, one colorblind-related, one not.

Grouped by Color. After waiting in line I was handed a Role Card and led to a holding area – an amazing replica of the Millennium Falcon. I wandered about, sat in the Holochess booth, and waited for our ship to be ready. 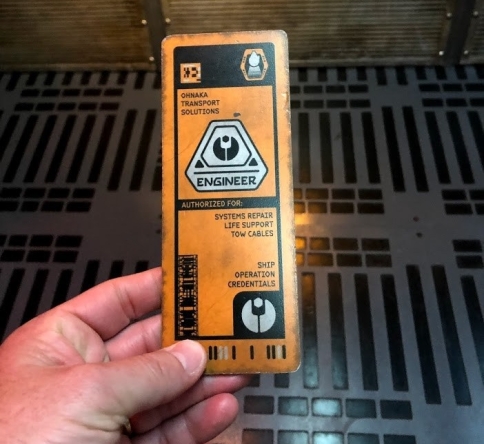 However, when they gave me the credential they didn’t tell me its color. I listened for a cast member to call out “Orangey-Yellow-Maybe-Brownish-Rust,” but they did not. Fortunately, the other members of our six-person crew helped me along, so all was well.

Play Your Role. There are three roles handed out on the Millennium Falcon: Pilot, Gunner, and Engineer. I was hopeful my real-life engineering education and field experience would come in handy to save the galaxy from evil. According to my Ship Operations Credentials, I was “authorized for systems repair, life support, and tow cables.” Apparently they had reviewed my resume.

As it turns out, the real credential required for the Engineer is, “Look at the wall and push flashing buttons. Do not watch the amazing story unfold or everyone will die. Do your job.”

I did my job. I repaired systems. I supported life. I cable-towed. I pushed the buttons.

It was still a fun time, but on my next visit I will climb the corporate ladder to Pilot, a role in which I have high enthusiasm, zero credentials, and little chance of success.

Take Two. I rode Smugglers Run a second time that day. I got stuck in the same Engineer role (womp, womp), but then I noticed that this credential’s design included the color typed on the card. Maybe Disney received early feedback about the color issue and were in the middle of switching all the cards from the original design to this new one? Maybe it’s two-sided and I never flipped it over?

View all posts by Brian Chandler